Even if you turn off the electronic support, you can drive the esQu like a normal scooter. Superfluous kilos due to bulky technology or blocking rollers are a thing of the past. With the Freestyle esQu you can even shine in skate parks, as its light weight and the geometry of a stunt scooter allow all kinds of tricks.

The esQu does not have an approval within the meaning of the StVO, so it is only allowed to drive on private premises with electronic support

When we started thinking about an electric scooter three years ago, our biggest driver was dissatisfaction with the products available on the market. After extensive research, we quickly felt that there was more to go and so we spent the last few years primarily on development, prototyping and testing. In particular, we lacked practicality in everyday life with most e-mobility products. Heavy, bulky scooters with a fighting weight of sometimes more than 20kg made some of an acceptable figure while they were rolling, but fell through in the everyday test, as they could not be moved without the drive.

Another point that was important to us and of course related to our fun sports DNA was that, despite the electric motor, we did not want to lose touch with the sport. For this reason, we have taken advantage of our extensive know-how from the stunt scooter area and developed the esQu (e = electronically operated, s = scooter, Qu = quantum jump) Powered by Chilli Pro Scooter. The geometry, robustness and light weight of a stunt scooter have been combined with intelligent hybrid electric technology to bring an absolutely new product to the market. The electric motor is not controlled by a throttle lever, but intelligently intervenes as soon as the driver exceeds the limit of 5km/h by kicking. From this point on, the esQu maintains the current speed, which is achieved by its own muscle strength. Up to 18km/h, the esQu intervenes in support and can be braked electronically, but also mechanically, at any time by means of the rear brake.

The esQu does not have an approval within the meaning of the StVO, so it is only allowed to drive on private land with electronic support. New draft laws are currently being discussed in politics, with hopefully a positive outcome for electromobility.

Apart from our basic model, all esQus come with Bluetooth and a certified app to charge status, speed, range and much more. to be able to check. 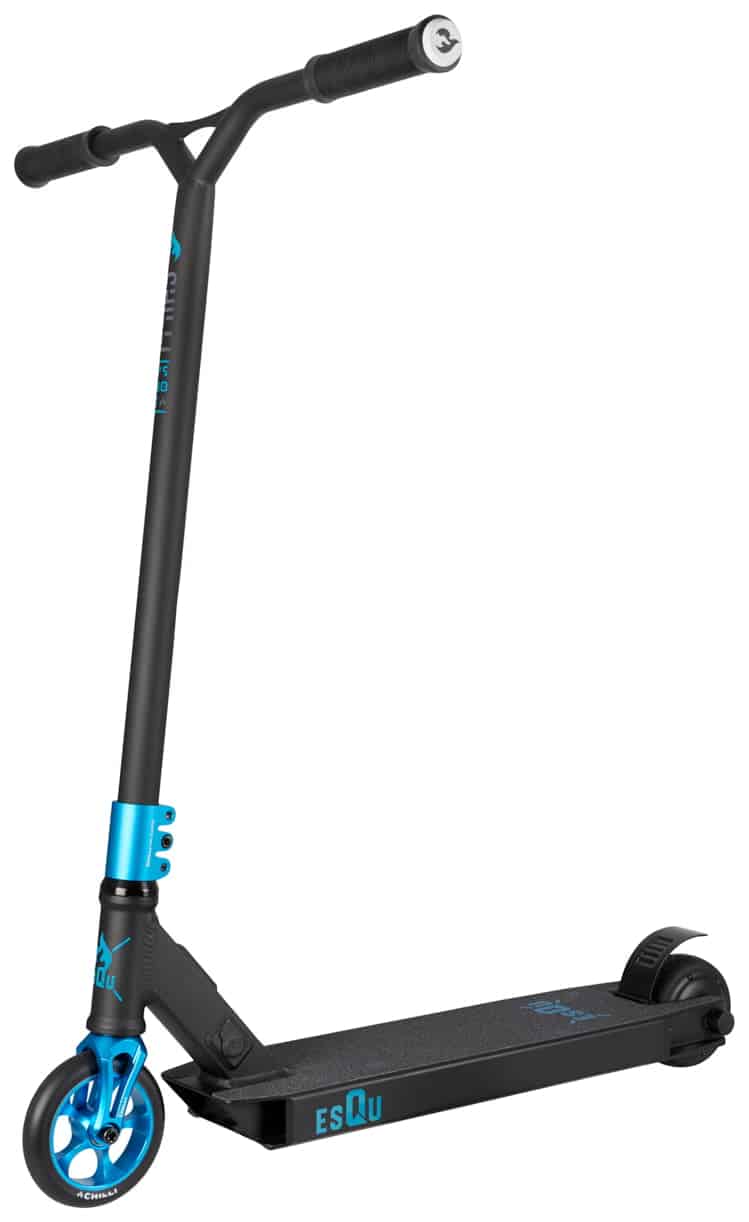 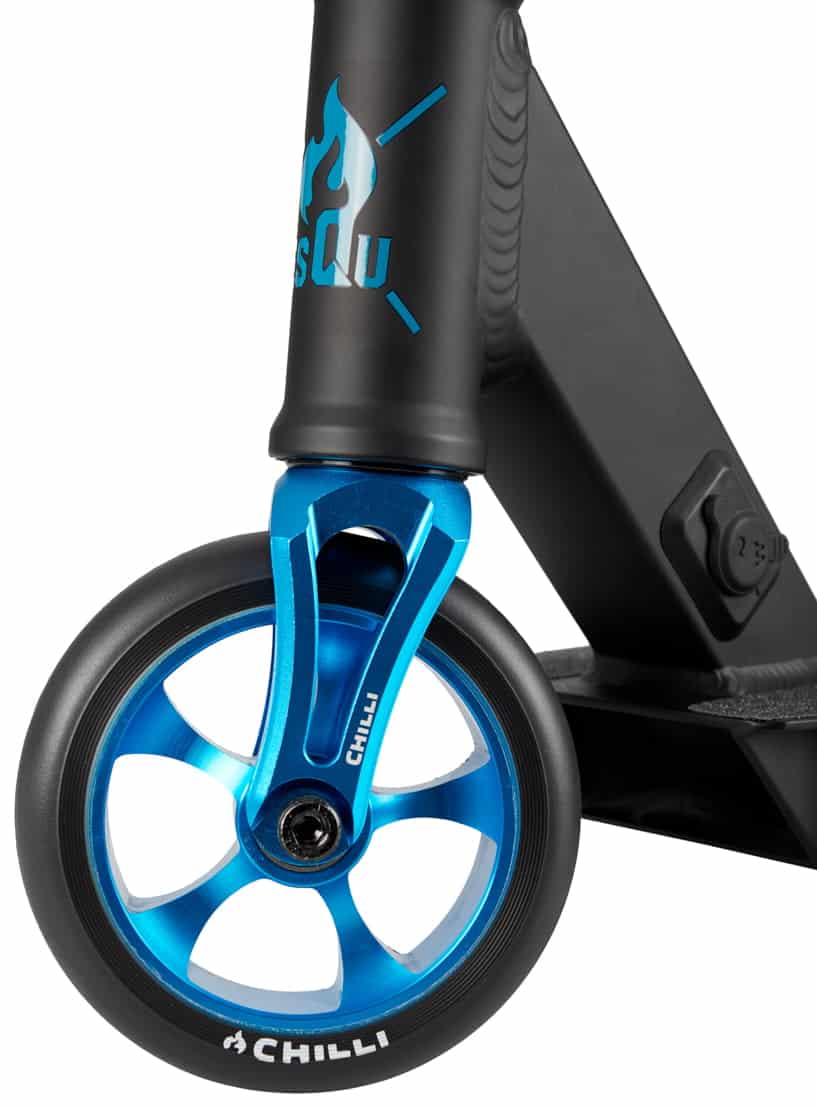 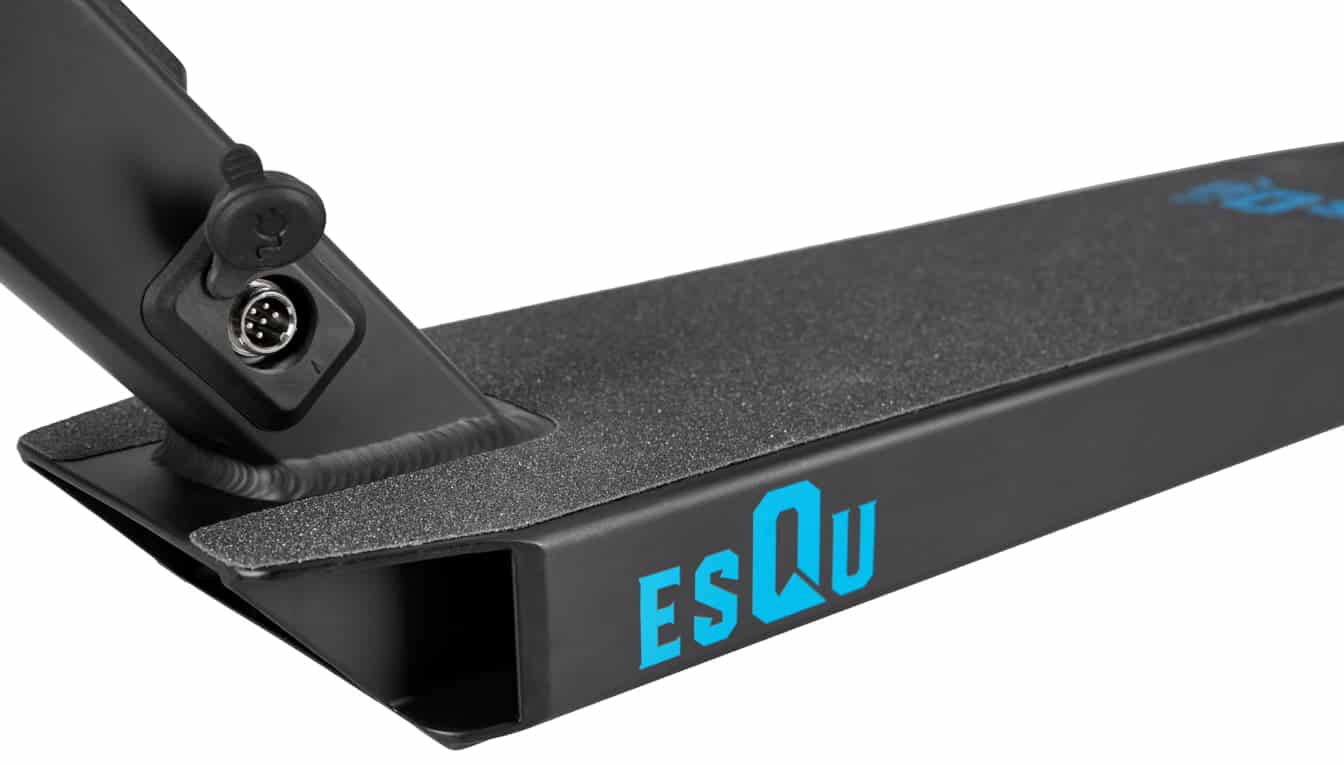 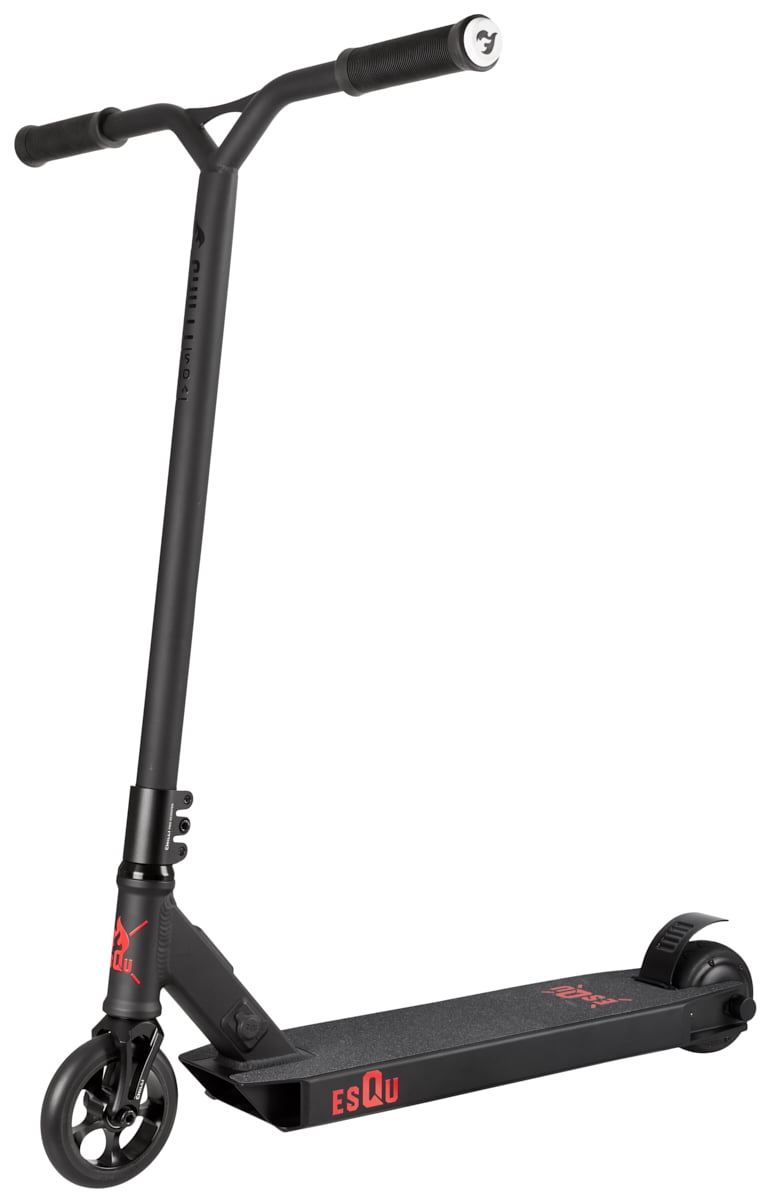 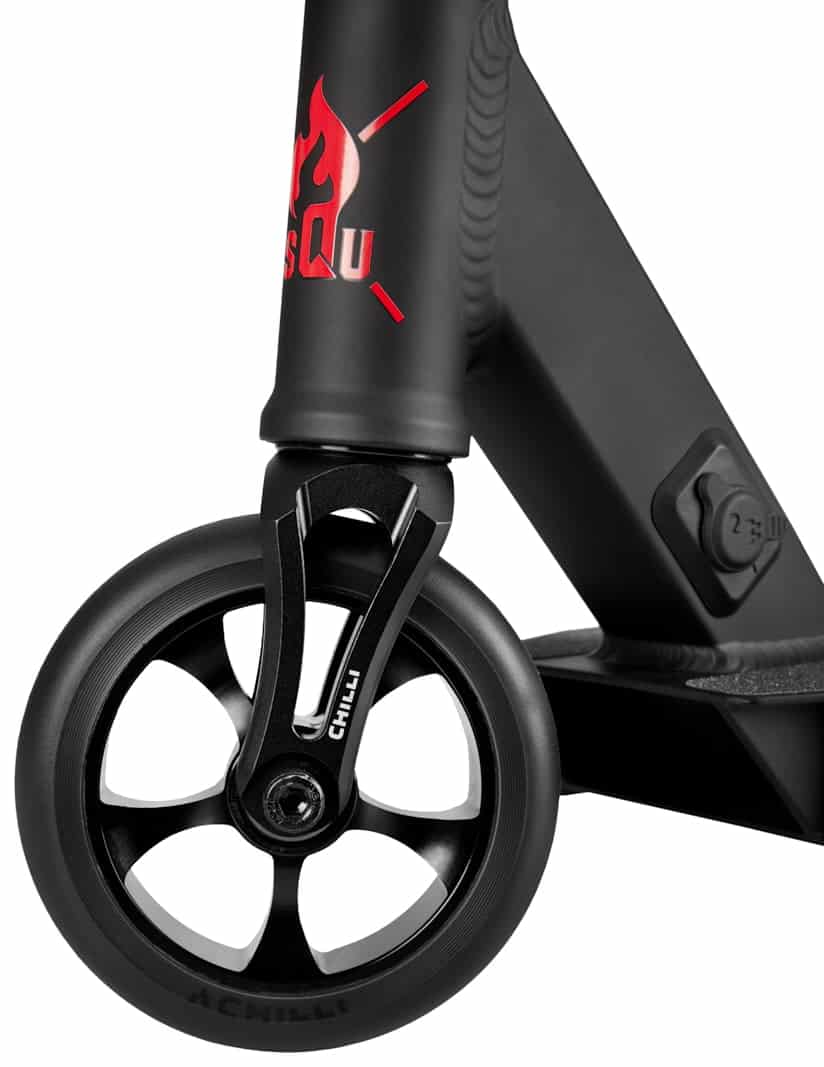 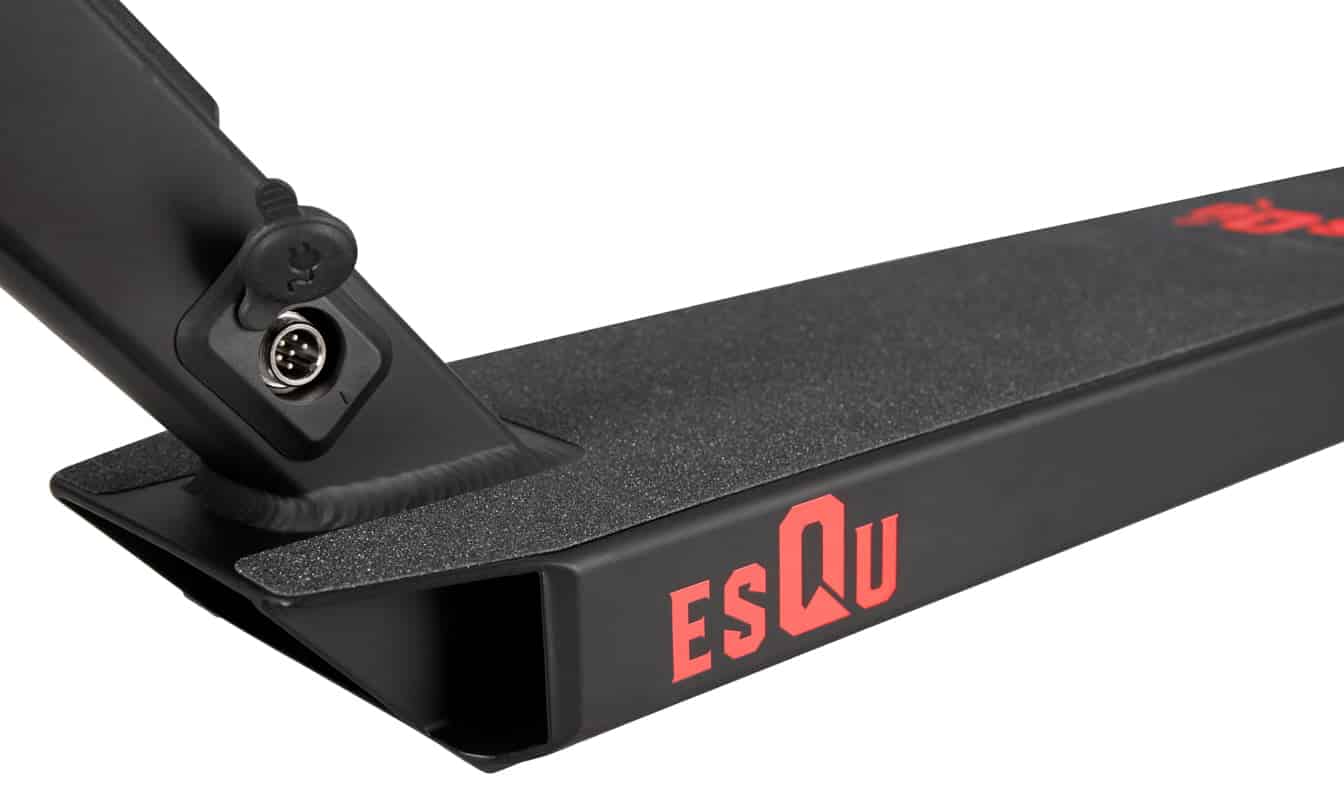